If there’s one thing Dubai is known for, its excessiveness. They hold many world records such as the ‘Largest Firework Display,’ ‘Tallest Hotel in the World,’ and of course the ‘Tallest Building in the world,’ also known as the Burj Khalifa. It wouldn’t surprise me if they held the world record for ‘The Most World Records.‘ People drive around in swanky cars, costing more than houses. But not more than houses here is Dubai– property here is insanely expensive. You can stay at their 7 star hotel, the Burj Al Arab for 3,000 USD per night– but don’t worry, if that room isn’t luxurious enough you can continue to chuck up thousands of dollars until the price per night is just as outrageous as you want. Who knows what you get in a hotel room that costs 13,000 USD per night?

Although this excessiveness can be seen as ridiculous and even reckless, there is one thing you have to acknowledge about the people of Dubai: they are innovative. It’s, perhaps, the most innovative place on Earth right now. They make their own islands. The Palm itself increased their shoreline by 72 miles. Once The World islands are finished, Dubai will have yet another amazing accomplishment: having built over 300 man-made islands in the shape of the world.

It’s impossible to spend time in Dubai without experiencing this excessiveness. Last night we went to the 5-star hotel and resort, Atlantis, on The Palm. We ate at a restaurant called Kaleidoscope. It was a buffet style restaurant with a focus on the regions of Asia cuisine. This was one of the most excessive meals I have ever eaten, and definitely the most luxurious buffet I have seen. They had dozens of interactive stations with foods from all over Asia. I can’t go without mentioning the mountain in the middle of the room: the dessert! They had over 50 different options for dessert, all eloquently displayed and prepared. I captured most of my courses, although there were some that were not documented. 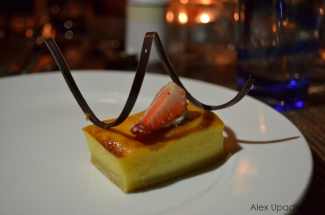 I am just wondering, was my caloric intake cancelled out by the many trips back and forth from the table to the food stations? Probably not.