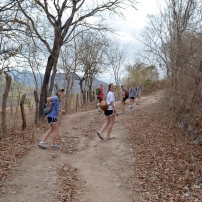 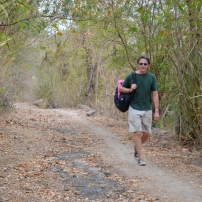 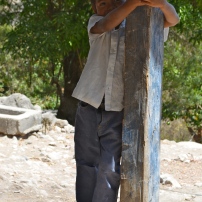 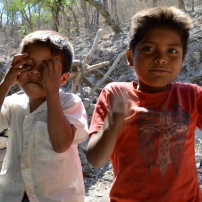 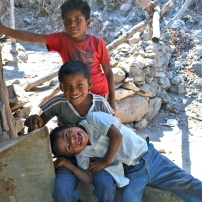 Day five was my favorite day of the trip. We all piled into a pickup truck and drove to the bottom of a mountain. The ride was bumpy– sometimes we would get stuck on rocks but our driver, Marvin, never failed to get us over them. When we reached the end of the road we crossed a creek in order to get to the base of the mountain. After the hike up we arrived at Loma Panda, a ceramic group run by four sisters and one daughter. The old ladies were full of charachter. We sat as they told us stories. Their family had been in that same location for over 300 years. It was hard to tell the age of the lady we were talking to– she could be anywhere from low 50’s to upper 60’s. She explained to us how her grandfather’s grandfather had been a potter. The funniest part was when she explained why she didn’t ever marry. She said that she never wanted to put up with men or children– they were too much of a hassle. These ladies were true business people with the most beautiful and imaginative form of business. Their pots were by far the most creative. I bout a weird owl creature vase that looks like a fictional cartoon character. After we bought pots from them we watched them throw. Their clay was the worst we had seen so far–  very grainy and not plastic at all. A few of us snuck off with two boys to play soccer. Because there wasn’t enough space we ended up passing and throwing the ball. Eventually we attracted attention and more kids started joining. The other girls came down and before we knew it we had a full circle of monkey in the middle going. After about 15 minutes more Hazelgrove came down. We made our way back to the studio and watched more people throw. The boys would not leave us alone anymore. I taught them how to say “hello” and “goodbye.” My favorite part of the day was when I took pictures and videos of them being wacky and then showed them back to them. They belly laughed so loud it was amazing.